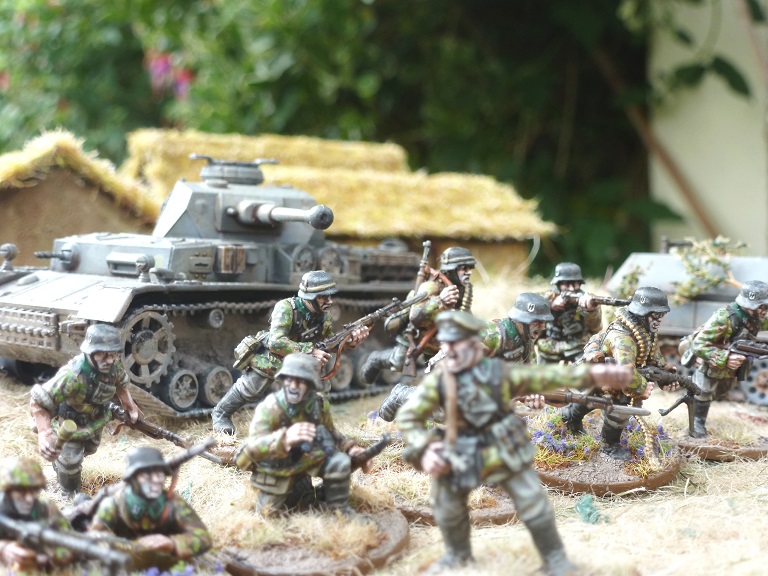 The infamous Waffen-SS. The British painter Andy Singleton did his best and is very proud about his results (and great they are) and about Bolt Action. He tries to be as authentic and historical as possible:

For me, this gives a deeper connection to the models and when using them in game it’s not 1,000 point German force, instead it’s the lead elements of the 79th infantry Division pushing towards Stalingrad in 1942. It brings the collection to life (…) ”

With unlimited enthousiam he writes about the ‘iconic’ German medium machine gun and the ‘fantastic’ Volkssturm firepower.

Such stories are a bit – embarrassing for me as a hobbyist. I have no problems with Roman legionaries, or Napoleons Old Guard. Yes, they were attackers, conquerors, occupying forces, agressors, just like the Germans in WW2. I certainly have no problems with WW2-wargaming. I’m an occasional WW2-wargamer myself. I would be very proud myself if I could paint my soldiers as excellent as mr Singleton.

However, his hyperbolic tone gives me the impression that mr Singleton not only likes his toy soldiers, but that he loves the real life German WW2 army as well. Including the infamous Waffen-SS. That’s – weird. That’s – aargh. The real-life Waffen-SS was not just another German elite unit – the Waffen SS was responsible for many war crimes. Mr Singleton is probably a nice middle-of-the-road wargame dad or granddad, not an extremist. Anyway, I like a more distant tone. Don’t describe them as if they are Marvel superheroes with iconic red capes. Gaming is fun. 20th-century genocidal war is not.

UPDATE: when researching a possible late war wargame scenario I stumbled across a unit of the Waffen SS-Gebirgsjäger Nord. ‘Aha’, I thought at first, ‘a standard commando unit which by accident happened to be a Waffen-SS-unit’. Not really. Browsing, I discovered that their medic in 1942-1945 was the war criminal Aribert Heim, ‘dr Death’, a Josef Mengele-doctor who served time in Sachsenhausen, dissected Jews alive and cut off their heads, cooked the skulls and preserved the skulls as souvenirs.

Iconic criminals, that was wat they were.

Thank god I’m not the only wargamer feeling unease.