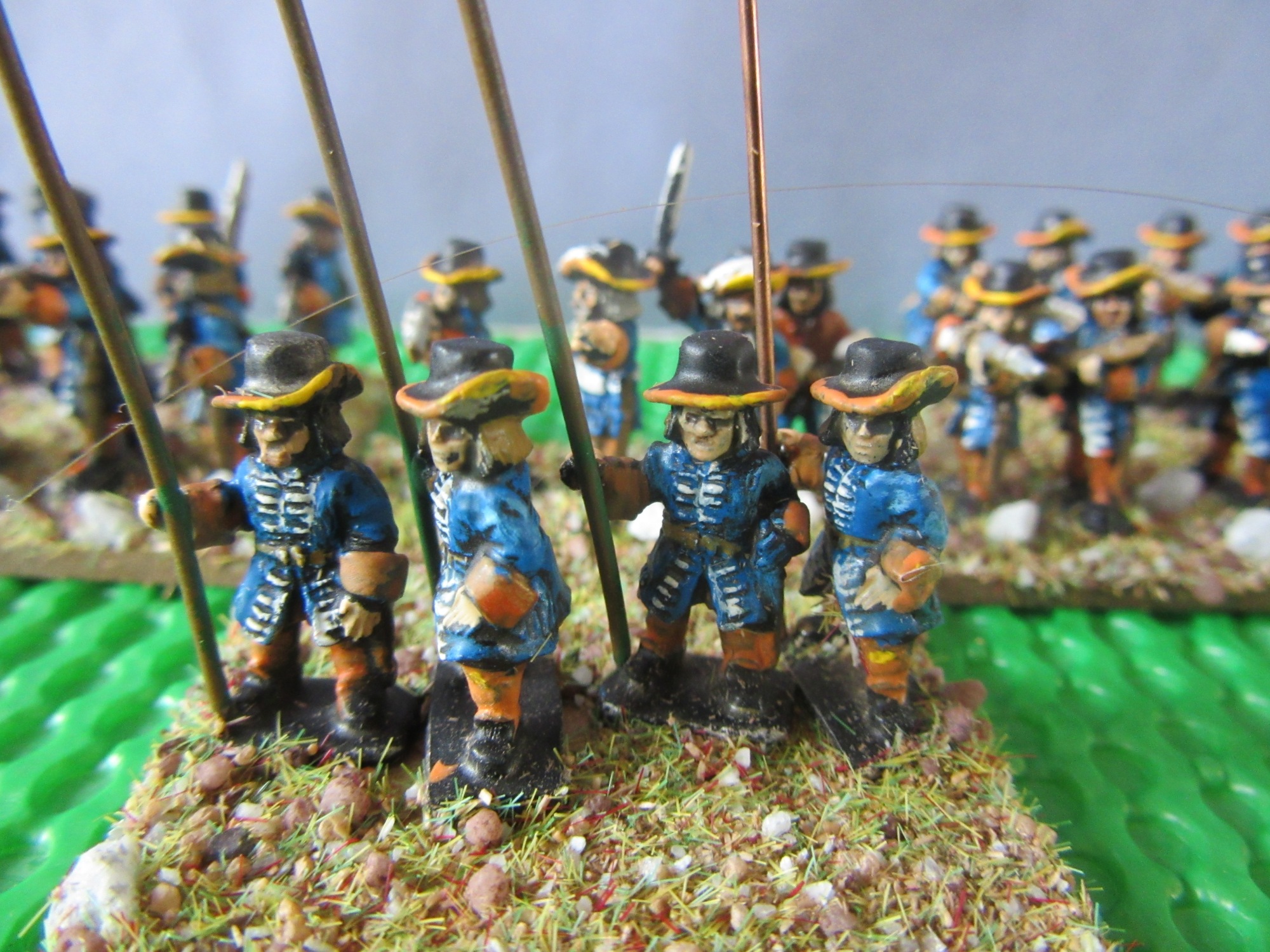 A few years ago I started a 15mm Renaissance Wargaming project. It’s almost finished now and for myself and posterity I made notes and pictures and tried to compare different brands. Bulk of my army is Irregular, see my first article. In this blog I compare Essex, Irregular and Lurkio infantry that I painted as the famous Blue Guard regiment, the 1692 SAS.

Lurkio is a small company that first was run by Simon Clarke (who, earlier, painted miniatures for Irregular). The company has a nice range Ancients and ECW/League of Augsburg. A couple of years ago Clarke sold his company to Simon Hall. Simon Hall designed Mortem & Gloriam and is adapting that system for other era’s, including Late Renaissance, see his Wargames Zone website.

After speedpainting a base force with Irregular miniatures I bought several Lurkio League of Augsburg packs.

No Essex for me

A matter of taste. Essex is the market leader. I just don’t like the proportions, relatively short-legged, more expensive per figure than Irregular. In comparison, Irregular’s poses, though, are limited, while Lurkio offers variation. See below.

Lurkio is the white metal miniature.

The good news is that Essex has an unmatched collection with many variants and subvariants. Musketeers with apostles, without, with long coat, short coat, improvised weapon, bonnet: best of the three brands. Impressive catalog, five internet pages. Still, not my choice.

When I uploaded my pics to our club Facebook-group, the Lurkio faces fooled the Facebook engine and were falsely recognized as human faces. I could tag them, Facebook thought they belonged to members of our club. Essex & Irregular heads were not ‘recognized’. So Lurkio has the most convincing faces indeed.

Lurkio and Irregular appear taller than Essex, ‘heroic 15mm’. Lurkio is truly heroic, with bigger heads and big muskets. Actually Clarke commented in a forum, some years ago, that Irregular was just as good as any but that the heads were not detailed enough, in his opinion.

Essex miniatures have relatively short legs. Lurkio is bulkier than Essex and Irregular, some miniatures appear ‘fat’ in my eyes.

The Lurkio figures have relatively short longcoats and bulky legs. They appear to wear moonboots. I prefer longer coats and tight, sexy, stockings, the historical standard. All brands sell the two types of grenadiers, with ‘German’ bearskin cap and with the ‘Dutch/English’ mitra with a front plate.

I noticed that the Essex/Irregular figures have double crossed strapbelts. Lurkio figures mostly have a single crossbelt, and the officers have no wigs, which is apparently more 1650-1695-ECW-fashion, according to the Osprey Louis XIV/Marlborough books. Two crossed belts and wigs appear to be more 1695-1710-style, the Osprey brooks indicate. Although no one can be sure: uniforms were not really standardized.

The 24-men Lurkio regiment that I bought in 2015 had ELEVEN poses. I like that. Cheap Irregular offers just five, eight if you count the officers. Besides, many Irregular miniatures, too many IMHO, have their left hand on their hip and their right arm outstretched, which is boring. I can’t judge Essex, because I don’t have a full regiment. I read they have 2-3 variations per pack of 8.

Essex provides command packs with two standard bearers. Irregular provides just one standard bearer. Lurkio sent me a Dutch regiment with just 4 pikes, and no separate standard bearer at all. In Lurkio’s example picture two pikemen are used as standard bearers and two are regular pikemen. 6 Field of Glory bases were included then, don’t know if this still is the case now. Under 2021 management the Lurkio regimental composition is more a personal choice, within the same variety of poses.

An Irregular set with 64 infantry, 12 cavalry, a general and a cannon costs was discounted battle pack (2021 price level) for 32,5 pound. Essex and Lurkio sell similar (undiscounted) combinations for 50-55 GBP.

This batch was primed black and dipped in Army Painter Quickshade afterwards. A mistake, either paint black and highlight, or prime in a bright colour and dip. The blackprimed post-dipped figures were relatively too dark and I often had to re-highlight miniatures.

I painted the Essex/Irregular unit as Garde Suisse (but in fact they can pose as any red/blue musketeer unit from any nation, the combination was quite usual). Painting small details (like buttons) on Irregular was just as easy as painting Essex. I painted the Lurkio set as the famous Dutch ‘Blauwe Garde’, King William’s commando troops. As expected, the Lurkio elevated details are easier painting than Essex/Irregular, often small drybrushing was enough to colour the lace.

The more I painted, the bigger the differences. Some thoughts: